At the bar with… Jackie Rogers, Half Moon Brewery 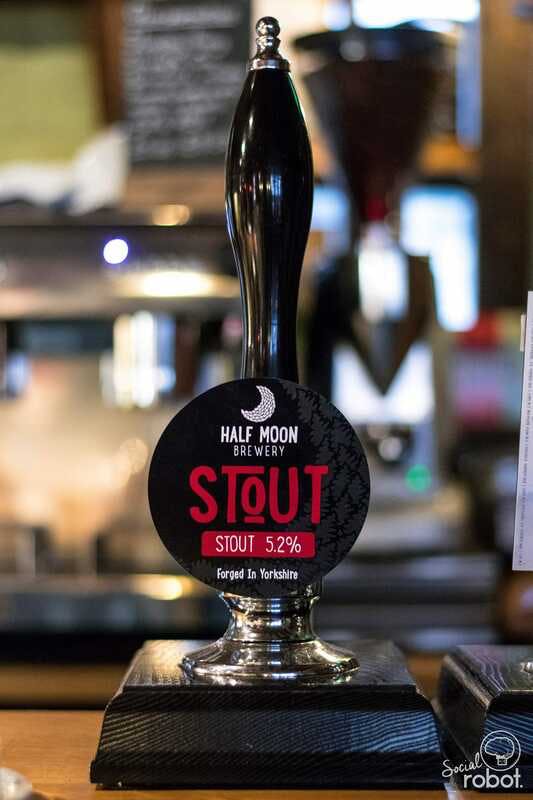 based just outside York in the picturesque village of Ellerton, is no ordinary brewhouse. For starters, with a capacity of five barrels, it’s truly a microbrewery. It also acknowledges its place in local history, with the brewery’s name a reference to the pub that was based on the neighbouring house during the nineteenth century.

It’s also a family business in the literal sense: husband-and-wife team Tony and Jackie Rogers share the running of the brewery, enlisting the help of friends and family for events and festivals and even enlisting their very own ‘sensory consultant’ to advise on tasting notes.

On the Brewtown blog today we’re catching up with owner and manager Jackie, who was kind enough to answer a few of our questions about the brewery’s past, present and future…

Your website says that Half Moon Brewery was ‘a culmination of a life-long desire to produce our own real ales’. What’s your history with beer and brewing, and what led you to turn your brewery dreams into reality?

For starters, Tony and I met at a beer festival – some things are just meant to be!

Tony was born and brought up in the legendary Ferry Boat Inn at Thorganby, just outside York. Being raised in a multiple CAMRA award-winning hostelry gave him a critical palate for real ale from a very young age. After spending many years experimenting with his own homebrews, Tony started working Saturday shifts at Great Heck brewery on their original four-barrel kit.

Before we set up Half Moon, I spent a year working with Sue Simpson, one of the region’s first brewsters, at Brown Cow Brewery near Selby, and Tony cemented his knowledge with a training course at Brewlab in Sunderland. We had intended to start brewing whilst both still working in full-time jobs, building things up slowly until we could take the plunge properly. However, when we were both made redundant within six weeks of one another we took it as a sign and went for it full throttle – and that’s how Half Moon Brewery was born!

Tell us about where you brew – your brewhouse has an interesting (and beery) history, doesn’t it?

We brew in an old blacksmith’s forge that is situated next to our house in Ellerton, just outside York. The house was built in 1761 as a dwelling for the village miller (the mill’s foundations are still in the garden); then the forge was built in 1794 by then-owner Mathew Brown and put to use by James Thwaites, blacksmith and Brown’s tenant.

In 1825, Thwaites’ successor George Hustwick ran the house as the Half Moon pub, a nice little sideline to his blacksmithing. Henry Cass, Hustwick’s successor, also ran the Half Moon pub. However, in 1877 Mathew Brown sold the premises to Charles Harrison, a blacksmith who clearly had no desire to be a pub landlord, and the Half Moon ceased to trade.

How do you divide the work between the two of you, and what do you both do best?

Workwise, Tony is our brewer (although I do help ‘mash in’ on brew days). Tony’s responsible for developing recipes, brewing the beer, cleaning and maintaining our brewing equipment, and most of the sales and delivery work, too.

Meanwhile, my role is in the business and publicity side of the brewery: I organise events and beer festivals, run brewery tours, and handle our marketing and promotion. We also have a part-time member of staff, Harry, who helps us wash casks and rack the beer, and we’re also very pleased to be supported by sensory consultant Jo Menneer, who advises us on tasting notes and food pairings.

Brewing as we do, with our home and our family such an intrinsic part of it, makes the brewery a way of life, not a job. There’s always beer in the tanks to be looked after – we wouldn’t have it any other way.

Since the brewhouse is part of your home, how do you balance brewing with family life? Do friends and family get involved, too?

Having the brewery within a stone’s throw of our house gives us a certain amount of flexibility: we try to fit our day-to-day family life around the brewery, and vice versa. On brew days, we mash in and then have family breakfast with our daughter; then, once she’s on the school bus, we walk the dogs. That’s all within the 90-minute mash time – it’s tight, but worth the effort!

Beer festivals are a different matter as most beer festivals are on a supply only basis – we provide the beer and the festival provides the staff. However, when we do run a bar, assistance comes from various family members, all of whom are well trained in serving cask ale.

What are you most proud of achieving with Half Moon Brewery? Are there any moments that really stand out for you?

We’re very proud of the fact that we have built Half Moon SIBA awardHalf Moon Brewery as a business from nothing to what it is today. Tony takes a lot of pride in the fact that he designed the brewery plant and, with help from a skilled friend, built it himself.

One of the standout moments for Half Moon Brewery was at the 2014 York Beer Festival when we won our first award: a silver SIBA North East award for our Dark Masquerade. Winning awards is something every brewer aspires to, and is the ultimate accolade for most breweries: it’s conclusive proof that people are drinking and enjoying the beers that we make. It isn’t just about the awards, though: there’s no better feeling than receiving positive feedback from our customers, and we are still humbled when people come up to us and say they enjoy drinking our beers.

Dark Masquerade, our award-winning dark mild, because it breaks some myths about dark ales. Unusually for dark ale, it has a light mouthfeel and is packed with dark chocolate and liquorice flavours. It’s our way of demonstrating that mild ales are not bland – and, at 3.6%, that they don’t have to be strong to be tasty.

What’s next for Half Moon – anything exciting we should be looking out for?

There’s plenty in the pipeline for Half Moon, and we’re planning even more exciting brews as our core range goes from strength to strength. Currently, we have plans for a nice strong barrel-aged old ale, a spring ale with a twist, and maybe a keg beer – anything can happen!

For both of us, it would have to be Dark Masquerade – Tony because it’s his favourite child, always! For me, it’s because it was the beer that converted me to drinking dark ales: it’s warming, smoky, and intensely flavoured. It made its first appearance at a masquerade party in the village, and we think the name still suits it down to the ground.