At the bar with… Lee Grabham, Brew York 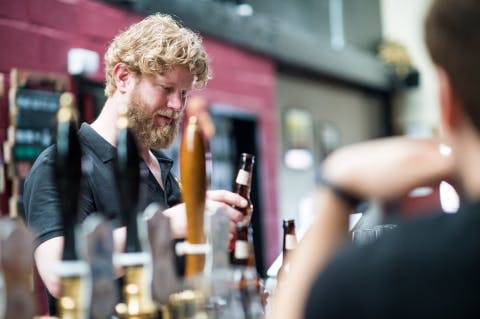 Brew York is a relatively new addition to the Yorkshire beer scene, which makes the brewery’s stratospheric ascent to popularity even more impressive.

Owned and run by two-man team Wayne Smith and Lee Grabham, what started as the shared pipe-dream of two homebrewing enthusiasts became a reality when the pair decided to take the plunge. Since they opened the doors of their brand-new brewery and taproom (tucked away from the road on historic Walmgate in the centre of York) almost exactly a year ago, they’ve become a force to be reckoned with, winning acclaim for their refreshingly modern brews and hosting tours, tastings and tap takeovers in their bar. It’s been a fantastic first year for Brew York, and they’re only getting bigger and better.

Today on the Brewtown blog, we’re sitting down for a chat with Lee and talking decision-making, desert island beers, and what’s next on the cards for York’s newest kids on the (brewery) block…

How did the two of you meet, and what led you to the idea of starting a brewery together?

We met on a friend’s stag do quite a few years back and struck up a great friendship due to a shared obsession with all things beer. It wasn’t long before we were brewing together every week, and we’d regularly talk down the pub about what it might be like to have our brewery. When the opportunity finally came up, we decided to take the plunge and give it a go – fortuitously, we were both offered voluntary redundancy within a few months of each other which helped us make up our minds.

What’s the workflow like at Brew  York – do you each handle different parts of the brewing process, or is every element of the business a team effort?

We’ve struck quite a natural balance between us, which means we each take charge of the business tasks that play to our individual strengths but we both get to do what we enjoy most by sharing the brewing load. Wayne has a background in finance, so naturally he looks after the money side of the business; meanwhile, I’m the more creative one who’s constantly thinking up new recipes and ideas to take the brewery forward.

How would you describe your brewing style – what do you think makes Brew York’s beers different and special?

Our brewing style is a fusion of English and US beer styles done the Brew York way. We both like American beer styles, but we like the challenge and the innovation involved in trying to give these more of a Yorkshire spin. We’ve also adopted what we think of as an ethical approach to brewing: we refuse to use isinglass (a fining agent from the swim bladder of a fish) to filter our beers, which makes them vegetarian and often vegan-friendly.

Our ethical views also extend to our choice of ingredients: the way we choose to brew has many parallels with the purity laws adhered to by German beers, which limit the number and type of ingredients in a brew to make sure the finished product is as pure and unadulterated as it can be. Unlike the Germans, though, we’re not afraid to throw in a few interesting flavours like tonka beans or coconut.

We gather you’ve recently expanded your production capacity, and are already on the way to expanding again – congrats! Has the new capacity changed how you brew, and what do you think another expansion will bring to the brewery?

I wouldn’t say that the expansion has directly changed the way we brew – we’ll always be looking for ways of improving quality and enhancing flavour no matter what capacity we have for production. What the expansion can give us, though, is the flexibility to do what we enjoy most: experimenting. It means we have the space to keep trying new things and developing new beers; hopefully, many more of them will start making it into cans, too, which will mean we can distribute our beer further afield and show more people what Brew York is about.

Your taproom is an amazing space to sit and have a drink in. What’s it like running a bar at the same time as the brewery – does it affect what you choose to brew?

Thank you! Yes, we’re very proud of what we have created with the Tap Room. We’ll admit that running both the brewery and the Tap Room at the same time can be knackering – in the early days, we tried to run them both pretty much on our own, and we were burning ourselves out! Thankfully, these days we have someone we can rely on – Andy – overseeing things in the Tap Room, so we can focus our attention into just making the best beer we can.

The Tap Room and the direct access it offers to our customers has definitely influenced what we brew. JARSA, a 3.7% pale ale (and a recent addition to our core range) came about as one of the things most commonly asked for at the bar that we didn’t already have: something light and hoppy, but less than 4% in strength. The number of people asking when we are going to brew Tonkoko again definitely influenced our decision to brew another batch, too.

What are you most proud of achieving with Brew York? Are there any moments that really stand out for you?

The biggest thrill was probably the launch day when we got to reveal the culmination of a lot of hard work and many sleepless nights. There was always the worry that just because we’d built somewhere we would want to drink, it didn’t mean anyone else would want to. With an unbelievable turnout that even led to a brewery running out of beer, it’s fair to say that York gave us an emphatic confirmation that what we were bringing to York was something they wanted.

Aside from the launch, I think that Tonkoko winning Beer of the Festival during our debut appearance at York Beer & Cider Festival was pretty amazing. I still remember clearly the buzz I got when someone came up to me as I walked into the festival one day and said “You must be pretty happy!”, to which I replied “Yes, it’s a lovely day,” thinking they were referring to the weather. Spotting my confusion, they then quickly clarified: ‘No! You just won beer of the festival, haven’t you heard?!” That was a very proud moment for us: recognition for a lot of hard work for everyone involved with Brew York.

It would have to be Tonkoko. For many people, it’s the one that put us on the map, and it’s definitely the most unique beer we’ve produced to date. It’s a 4.3% milk stout (a stout made with lactose, which makes it sweeter and richer than a regular beer) that we have decadently infused with hand-toasted coconut, Madagascan vanilla, Belgian-sourced cacao nibs and tonka beans. It’s a hugely aromatic and luxuriously flavoured beer that many people have described as being like ‘liquid Bounty’.

We were literally begged by people to re-brew this one, and whilst we’ve had other beers that have drawn great acclaim nothing else to date has created the response that this beer got.

For me, it would have to be something really dark and rich, so either something like Lervig’s 3 Bean Porter or Omnipollo’s Noa Pecan Mud Cake Stout.

For Wayne, it would be something really juicy like Magic Rock’s Cannonball – or, more likely, their annual special Un-Human Cannonball, which we both seek out and drink religiously each year when it’s released!

To visit Brew York, book a seat on one of our York brewery tours.