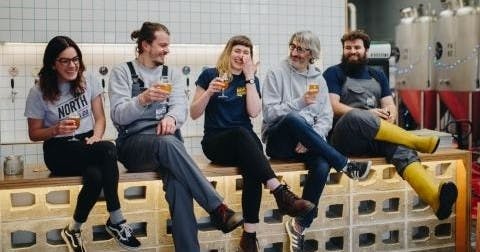 Inspired by continental cafe-bars and dismayed by the lack of options available on the Leeds bar scene at the time, directors John Gyngell and Christian Townsley set out to revive the city’s flagging nightlife by opening a friendly drinking spot with a focus on never-before-seen imported beers and excellent service.

How did the two of you meet, and what led you to the idea of starting what may be considered to be the first craft beer bar in the UK and then a brewery together?

Inspired by continental cafe-bars and dismayed by the lack of options available on the Leeds bar scene at the time, directors John Gyngell and Christian Townsley set out to revive the city’s flagging nightlife by opening a friendly drinking spot with a focus on never-before-seen imported beers and excellent service.

“We were working as glass collectors when we discovered Belgian beers like Orval, Duval and Chimay and were completely blown away. We travelled regularly to Belgium, researching beers, bars and the drinking culture, then extended our research to the Netherlands, Germany and the USA”, said Townsley.

The timing of the bar’s opening, and its proximity to two of the UK’s most important importers and distributors of speciality beer (James Clay and Vertical Drinks), meant that North Bar was perfectly placed to spark a revolution in the UK craft beer scene, hosting the UK launches of brands such as Sierra Nevada, Erdinger, Brooklyn and Schneider Weiss and establishing its reputation as a Mecca for beer fans. Six additional bars later, the pair finally took the plunge and launch North Brewing Company in November 2015.

You have created the event EatNorth in collaboration with Leeds Indie Food which was hugely successful last weekend. Will there be many more of these and do you see there being similar collaborative events during the rest of the year?

We initially booked in six dates with Leeds Indie Food in the hope that it would have a good chance to build up, but there was a huge amount of buzz right from the start so we’ve been really, really pleased with how it’s worked out. People seem to love the style of the event and space down at the brewery. The quality and variety of food are amazing, the atmosphere is fantastic and it runs really smoothly. A lot of people have been coming back every week, which is amazing! But when there is completely different food on offer each weekend, why not?! So we’re working on a second lot of dates at the moment, more details lineups coming very soon…

You have a small team so how hands-on do the two of you get?

We don’t have much to do with the actual brewing process, but we’re both very hands-on it everything else, so you’ll often find us working behind the bar at various festivals and events and perhaps doing a bit of sweeping up afterwards!

What roles do you both play at the brewery?

We share the load of most things, from managing sales and admin to attending events, PR, marketing, and planning.

What do you both do best?

You have a core range of beers for your outlets but does your brewer, Seb, get quite experimental and how much of a free reign do you give him? I have seen you do sours, saissons and we can’t forget the Pinata.

We place a huge amount of trust in Seb and his talents as a brewer, so we give him a lot of freedom. He’s always looking to make something better. At the moment the main limitation is capacity until we get more kit installed later this year.

What are you most proud of achieving with North Brewing Co? Are there any moments that really stand out for you?

Some of the awards we have won recently have been incredible, and the acceptance of our peers in the industry, including some of the people we’ve looked up to for years and years, has meant a great deal to us. When our favourite breweries want to collaborate with us and the best bars around the country want to stock our beer that’s a real seal of approval.

It has to be Transmission, our headline IPA. It’s been amazing since the first time it was brewed on a pilot kit… Christian nearly wept when he tasted the first batch.

Duchesse de Bourgogne – it’s unique, and always thrilling to drink. It tastes, unlike any other beer.