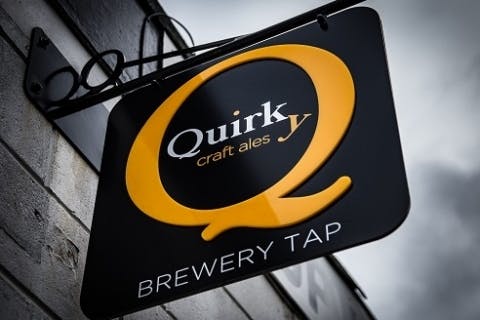 Quirky Ales in Garforth usually stop number one every Saturday. Today we meet owner, founder, and brewer Mike Quirk to find out about them, the coziest taproom in Yorkshire, the brewery and plans for the future.

Work-wise you have had quite an interesting life, what led you to move into brewing, and what advice would you give to other aspiring brewers?

I thoroughly enjoyed my 30 years as a police officer. My last operational role involved the management of major incidents and firearms operations.

I was a keen homebrewer and a chance meeting with Paul Lorryman, the excellent Landlord of The Fleece at Pudsey, led to me providing a beer for his festival. When I turned up it was on the bar between a Timothy Taylor’s beer and Elland Porter. My beer was one of the first to sell out, so this gave me the confidence to give it a go. To any aspiring brewer I would say that the industry is full of lovely helpful people, so don’t be afraid to ask questions.

What made you think of setting up a taproom and a brewery on a small industrial site in Garforth?

I’m from the area and I realized that there was a gap in the market. I initially started Quirky Ales in a garden shed, then moved to a larger unit with enough space to open a small tap. Access to the brewery next door generates interest and adds to the theatre.

Your taproom is a wonderfully relaxing place to enjoy a drink, with food trucks and live music for visitors. What is it like running a bar as well as a brewery – does it affect

what you choose to brew?

In truth, I brew too many beers, but that’s half the fun. Our core range is quite large and I brew limited-edition beers on a regular basis. When we know we have a food van booked, we try to supply beers that complement the food. For spicy food, we will have a sharper hop-forward beer such as Hip Hop 5.5%. When we had a vegetarian food van, we offered an unfined beer on tap. Running the bar is time-consuming but rewarding, especially when I see customers having a great time. I feel that we provide a community base, almost as an old-fashioned pub might have done but with a modern twist.

What are you most proud of achieving with Quirky Ales brewery? Any stand out moments?

We ran a community festival in the summer, with a stage in the yard and a large crowd watching some great bands. It was fantastic to see everyone having such a good time in a tucked-away industrial estate. The local links are something we care about; our waste grain goes to a local farmer and the hops to a community gardening group. Overall I’m very proud of what we have achieved as this is only supposed to be a part-time hobby!

Your beer schools are extremely popular, what else do you have in the pipeline?

I’m planning a battle of the brew schools. I’ve kept a sample of beers from most of the groups so I’m hoping to get them together for a blind tasting session to see which is voted the top brew school beer. I must also mention that I plan to continue my work with the Harewood Food and Drink Project next year and further beers will be made using produce from the Estate

Which one of your beers would you recommend everyone should try, and why?

Interesting question, I think most brewers tend to design recipes based on their own palate, I like a balanced beer where the malt base provides an equal amount of taste as the hops. I would recommend our Porter; it shows that a 3.5% beer can still deliver on flavor. In December I’m going to brew a New Zealand pale using Rakau hops. If the test brew is anything to go by it could be very good.

Finally, what would your ‘desert island’ beer be?
I think my best ever pint is based on the context and surroundings of the where I had the drink. I recently spent a day walking in the Dales and finally arrived at Kettlewell, where I had a Taylors Golden Best. It went straight down in one before I had even left the bar. By the way, I’m a complete lightweight when it comes to drinking.