Swanning Around in Pickering 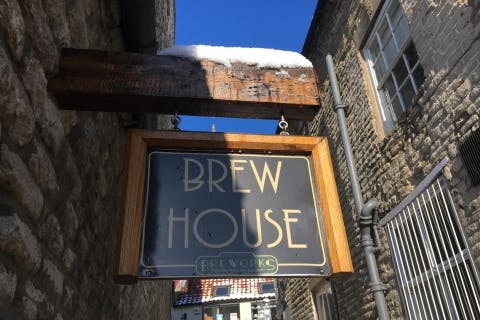 Pickering’s newest brewery, GB Breworks, arrived at the Black Swan Inn two years ago. The 17th Century Coaching Inn has added Whistlers Gin Bar, redeveloped its bedrooms and front bar, plus recently became a finalist in the AA’s friendliest B&B awards! Best of all Tristan is making some cracking beers which will be showcased at the Swanning Around festival this Father’s Day.

The Hall family went to Turkey on an expat comment and ended up being owners of the countries 4th largest brewery. How did that come about?

We moved to Istanbul in 2006 and at that time the quality of the beers available was pretty dire. Dad was inspired by this to start home brewing and it quickly turned into more than a hobby. It wasn’t unusual for him to be receiving requests to make beers from all around the world for the parents of my friends at school.

Due to the popularity in the beers dad was making and the lack of any venue in Istanbul (pre-2013) offering good quality craft beer, it was decided to take the leap and open a microbrewery in the center of the city, offering good beers and good food. We opened the ‘Bosphorus Brewing Company’ in 2012 and it is still open to this day.

You all returned to England a few years ago and bought The Black Swan Inn, Pickering. Please tell us about the history of the establishment.

The Black Swan Inn opened for business in 1737 (previous to that it was known as the New Globe Inn) and operated primarily as a coaching inn. Carriages could be rented by the day and horses stabled for those passing through the town. In addition, the yard at the rear of the building was the place to go to hire a hearse with horses and accompanying carriages. Residents included Charles Dickens and Rex Whistler, whose paintings can still be seen on the plasterwork of some of the rooms. Many significant events took place in the building. The current dining room once hosted Pickering’s courthouse and in 1836, The Black Swan hosted the celebrations that accompanied the inaugural journey of the Whitby and Pickering Railway.

It went on to be the site of Pickering’s first Masonic lodge (and has some unusual architecture which alludes to this) along with the Cyclist Touring Club (CTC). Prior to the prevalence of motor vehicles, The Black Swan was recognized as a renowned place for touring cyclists to stay and still bears record of this by way of the large ‘CTC Headquarters’ plaque on the wall (one of only 9 remaining in the UK). Operating as a commercial hotel, it passed from private ownership to Braims Brewery of Tadcaster at the turn of the 20th century. Subsequently, Braims was acquired by John Smiths Brewery and so The Black Swan became part of their estate and ultimately deteriorated through lack of investment. In 2015 it once again became privately owned and so began a process of rolling renovation to return it to its former prominence in the town. With nine comfortably modern letting rooms, a popular restaurant, brew-house and cocktail bar, the Black Swan assures today’s visitor of a visit to remember.

One of my favorite aspects of the Black Swan is Whistler’s Bar, Pickering’s first dedicated gin bar and cocktail bar. Where did the idea for its design come from and how has it been received by the locals?

The majority of the design was conjured up by owner Philip and Laura Bartram who operates Whistlers but there was an opportunity for other staff members at the Black Swan to put forward their ideas. Can only speak for myself but Whistlers has become a very popular drinking hole in Pickering due to it’s extensive and unique cocktail and gin selection, and thanks to it’s cozy and inviting atmosphere.

What are you most proud of achieving with The Black Swan? Are there any moments that really stand out for you? Do you have some interesting plans for the future?

Whistlers refurbishment was definitely something I definitely felt relieved and proud to accomplish at the Black Swan, but that was mainly due to the fairly quick turnaround time we had to get it done. The Brewery obviously is close to me as well as that is my daily work environment (when I’m not helping do all the other refurbishments!!).

On the 15th, 16th & 17th June you are holding your own festival, SWANNING AROUND, in conjunction with the Pickering in Business. What is the story behind this, how can people get details of it and how can they get there without having to drive?

Swanning Around began last year after a lot of passing comments from locals about putting on a beer festival, we thought – why not go one better and have something for everyone. Beers, ciders, lagers, gins and even lots of street food offerings to soak it all up with, as well as live music throughout the three-day event! We work closely with both breweries and distilleries from around the area to try and showcase the best beers and gins produced in this part of the country, we also draft in some of our friends from the bigger tonic and gin companies to make the event really special. This year Go Pickering and Pickering in Business have taken a role in the event and have organized a market for the Saturday inviting local craft stalls and food producers, with the aim of growing the event so in the years to follow this will be a town-wide celebration of everything this area has to offer!
The Swanning Around Facebook page is up and running and regularly updated with different things happening over the weekend. Public transport links are great into Pickering – there are a whole host of different bus services from all directions into the town.

Finally, you make some cracking beers but what would be your desert island beer and why?

If I could take a beer I make it’d be the Breworks Lager, just because it’s a lovely beer on a warm summers day! But I suppose if I was to have any other beer it’d be Pliny the Elder; it was the first-ever bottled beer I’d tried from America and I wish I’d appreciated it more because now it’s probably one of the hardest beers to get your hands on!