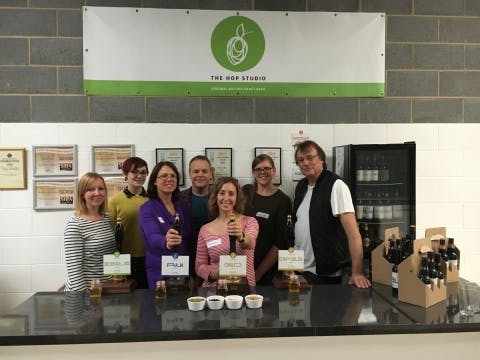 You founded The Hop Studio in 2012 – what inspired you to become a brewer?

As a professional bureaucrat for nearly 20 years, I thought it was time to make a meaningful and beneficial contribution to society. Although I’d claim that I was one of the good guys who got things done it was clear when the coalition government came to power they had the knife out for pen pushers like me. On our summer holidays in 2011, we spent a lot of time playing with business cases on the back of fag packets all of which came to naught. Every day we walked past a microbrewery in Bridport and the germ of an idea was sown….. One brewing course later and the rest, as they say, is history.

What are you most proud of achieving with The Hop Studio Brewery? Are there any moments that really stand out for you?

We have a fantastic team who all go above and beyond. Our original beers were actually very good. Last year we threw a lot of mud at the wall. About 30 new beers I think. We experimented with a lot of different styles and ingredients. There were a couple of very good beers, some average, and a few duds. This year we said we’d consolidate and pick the best of the back catalog plus a few new ones. We’ve become much better brewers over the time and when we dusted off and refreshed the original beers we were surprised at how well they’ve been received.

Well, I’d recommend them all – but you should certainly finish with Chocolat. Our barrel-aged white chocolate stout. We wanted to make a matching pair of Chocolat stouts., A light one and a dark one. We barrel-aged the dark one in brandy casks and the white one in bourbon casks along with a shed load of vanilla pods. Our starting point was to make a beer that reminds you of milky bars. It’s pretty close. Big and boozy and full of vanilla and chocolate flavors. It’s not a quaffing beer – better poured into shot glasses and drunk as an alternative to pudding wine. Think rhubarb crumble and custard or even a big cheese. Lovely stuff.

You have a bottled beer, ‘Treason’, for sale in the Houses of Parliament, how did that come about?
Ah, The House of Commons beer. We ummed and ahhhed for a long time trying to work out if it was worth us pitching for this one. We saw an advert in the trade press looking for three exclusive bottled beers: lager, an IPA and a Dark Beer. We thought if the bigger regional brewers were going to pitch for it we wouldn’t stand a chance on price.

A number of weeks later, the phone rang and we discovered there were at least six other people with sufficient time on their hands to put in a submission. More time passed and, after a blind tasting and a pitch to the House of Commons retail team in the very grand surroundings of Westminster Hall, we were over the line. So there you go… Brewed in York, the home of Guy Fawkes, a conspirator in the gunpowder plot of 1605, and served at Westminster. Treason!

How would you describe your brewing style – what do you think makes The Hop Studio’s beers different and special?
Tasty, Drinkable and Moorish. Simple. There’s an awful lot you can do with barley, hops, yeast, and water and having messed around throwing fruit, flowers, herbs, spices, and other silly stuff into beers I’m starting to think that keeping it simple is perhaps a good place to be.

What’s next for The Hop Studio – anything exciting we should be looking out for?
We’ve got another unique beer planned for the back end of the year that we’re not letting on about yet. Alex Brandon Davies has just joined us as Head Brewer and I’m looking forward brewing a string of new seasonal beers with him. The Tap Room is proving to be successful. We’d like to extend that side of the business if we can find the right place – watch this space on that one.

I don’t know of any decent breweries on a desert island so probably some cold, tasteless, mass-produced rubbish. If a case of a decent hoppy 5’ish % IPA washed up I’d be happy for a while…..

A Brewtown gift card takes the hassle out of looking for the perfect present. Our brewery tours and gin tasting experiences allow you to give something a little different: a unique day out!