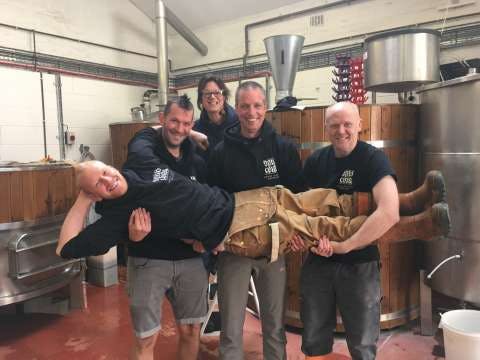 This month we are talking to Phil Saltonstall from Brass Castle Brewery. He tells us what makes beer gluten-free and vegan-friendly and how his time in America has influenced his views of the craft beer scene.

1) Brass Castle Brewery is renowned for gluten-free and vegan-friendly beers. Please would you explain how your beers are a) Vegan and b) Gluten-free.

We have always brewed our beers to be vegan/vegetarian-friendly, mainly by eschewing the use of isinglass in cask.

We also do not use honey (over-rated anyway, as adding honey doesn’t generally give a honey flavour to beer – those notes come from the malt) or lactose (a sneaky brewers method of adding milk-based sweetness to a beer).

There’s a full discussion about the demerits of isinglass use on our website but in short, it is often used as a process aid in some breweries to help cheapen the final beer. Unfortunately, the use of isinglass also strips flavour and can remove some of the nutrition and positive health elements in beer.

We prefer to spend more time making the beer and creating a fuller drink, rather than cutting corners.

As it happens, beer is nearly gluten-free anyway – based on the Codex Alimentarius standard for gluten-free foods. Research shows that people with coeliac disease can eat or drink unlimited amounts of products with gluten at a level of 20ppm or less, so beer with gluten levels below 20ppm can be certified gluten-free. Many beers fall into that category.

But to be absolutely sure, we add a natural plant-based protease enzyme in tiny amounts during fermentation (30ml in a 2000L batch of beer). The enzyme preparation is used by many larger breweries and helps to settle gluten from the beer. The expensive bit of the process comes with testing each batch for gluten. So although we test our cans to guarantee GF status, our more regular beers are ‘brewed to a gluten-free recipe’ but are not individually tested – to keep costs down at the pump.

2) Work-wise you have had quite an interesting life, so what made you give up the day job and become an award-winning brewer.

I began my working life as a Navy helicopter pilot and instructor, before working as a negotiator at the UN Security Council and latterly as a Coastguard Search and Rescue Coordinator. I was exposed to plenty of beer in all three roles!

I think I’ve probably joined that group of people who want to spend their time doing something practical and began to fear that I might be in danger of becoming lost behind a desk.

The beer industry is a lovely workplace, full of great people and its own rewards, although the work is hard and the remuneration small. I’ve huge respect for small brewers and the product that they make. Beer is a noble drink that needs to be celebrated and is currently going through a dynamic renaissance. It has a great capacity for bringing people together. Why would I not want to be part of that?

3) You spend quite a bit of the year in America. How do you feel this experience has influenced not only your beer but also your business? You have recently opened a taproom and imported a crawler. Do you see more ideas from America being replicated by Brass Castle?

Much of what small breweries are currently doing in the UK is heavily influenced by the beer revolution in the US. British drinkers have in turn developed a taste for punchy US hops. As a visitor to the US, you cannot escape the enthusiasm around local beer – but it’s always fun to note that many of the cutting-edge US brewers are importing British malts and using London ale yeast strains. So it’s very much still a two-way flow, although more innovation or ‘re-imagining’ is happening in the US, and that’s great to see. We had a lot of fun recently bringing some US cask beer into the UK, as American brewers also understand the great benefits of cask-conditioned beer. From a business perspective, it’s interesting to see how US brewers operate in a much more restricted and more bureaucratic climate – and the workarounds that they achieve. Crowler machines like ours are another method that US brewers have pioneered to allow people to take fresh interesting beer home, without having to go to the supermarket for something generic.

4) Your taproom is a wonderfully relaxing place to enjoy a drink and watch the people of Malton wander past. What’s it like running the bar as well as a brewery – does it affect what you choose to brew?

We’ve always wanted to host a Taphouse at Brass Castle, as connecting locally is important to us. The Taphouse is also a useful testbed for some beer ideas, as we can get direct – and usually very honest – feedback on our beers. That helps us to know how to refine or adjust our new recipes.

5) What are you most proud of achieving with Brass Castle brewery? Any stand out moments?

Brass Castle is the sum of a fantastic group of people who work hard to create the best and most interesting range of beers that we can manage.

I’m most proud of the group that we’ve assembled and their desire to really have fun with – and evangelise about – the full range of beer styles available. It’s a joy to come to work with enthusiasts and enjoy deciding what we’ll do next – which could be another hoppy pale, but it might be a grodziskie, a primary Brett ferment, a gruit, a hopped cider or even an ‘ordinary bitter’.

6) Brass Castle – along with Bad Seed Brewery – run a beer festival in Malton every May. How did this come about and how has it been received by the people of Malton?

The Bad Seed folks share our enthusiasm for all things beery and what better place to celebrate beer than in Yorkshire’s Food Capital? Malton (or ‘Malt-Town’) enjoyed decades as a brewing powerhouse, hosting two excellent large breweries that have since disappeared but whose footprints and influence still exist. The BEERTOWN festival each year remember this legacy and allows the two current breweries in Malton to host the kind of beer festival that we, as brewers, would like to go to. Malton’s Milton Rooms boasts the largest sprung dancefloor in North Yorkshire, so it’s the perfect venue for some top-notch music acts too.

o7) Which one of your beers would you recommend everyone should try, and why?

My answer would change every week. But given the current trend for IPA, people should really try our Sunshine. It’s approachable at 5.7%, but hugely flavoursome. As beers go, it a massive bang for your buck.

8) And finally, what would your ‘desert island’ beer be?

That’s tough – because beer is so varied and there’s one for every occasion, rather than one for all occasions! Sometimes simplicity wins out and I’d probably plump for our Helles Lager. It’s perfect for warmer climes and a great example of the style. Drinkability is the key to beer and Helles is perfect for that.

If you’re looking to celebrate a special birthday, plan a reunion, or get a group of mates together for your stag or hen party, then you’ve come to the best place!