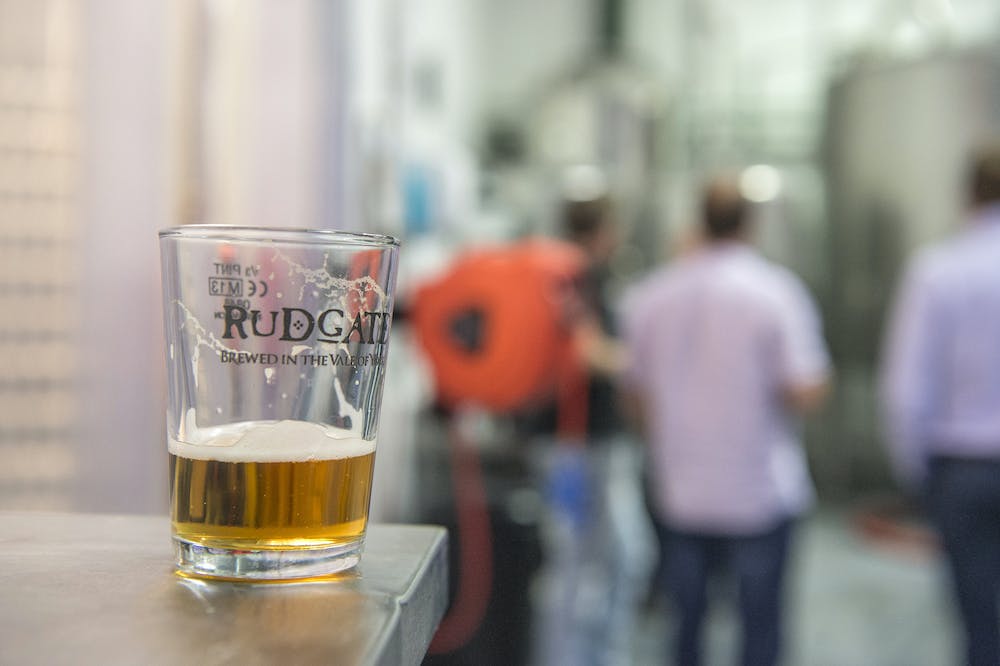 Named after the old road of `Rudgate’, this road and its history are what instigated the main theme of Vikings for the brewery. Today we talk to Rudgate owner Craig Lee to find out about the story of Rudgate Brewery and their first festival, Rudfest 2018

You left university with a degree in music. What led you into brewing, and how did you become the owner of one of North Yorkshire’s largest microbreweries?

I joined Rudgate washing barrels and delivering while at university. I was brought up in the pubs and have a passion for the trade. As much as I enjoy music I decided to keep this as a hobby and make brewing my career. I joined the I.B.D (Institute of Brewing and Distilling) and completed several of their brewing courses. A part-time job at the brewery became full time, then in 2003, I bought out one of the partners, followed by the other in 2008. Because of our success, I think we are now officially titled a `local brewery’ rather than a micro.

Rudgate has won many awards over the years and supplies beers to large companies like Virgin East Coast Rail. Tell us the secret behind the birth and success of Rudgate Brewery.

The original owners were Bass brewers. I was educated to produce consistently great beers using traditional methods, in an old fashioned way. We still use all of the techniques that my predecessors drilled into me. Cleanliness is godliness! You are only as good as your last pint! Consistency, consistency, consistency! There are a lot of interesting new breweries out there and I applaud their creativity. But Rudgate will always be more traditional, and unless it’s a wheat beer, always sparklingly clear.

What are you most proud of achieving with Rudgate Brewery? Are there any moments that really stand out for you?

Blimey. It’s all fantastic. I have enjoyed watching the company grow, employing more staff along the way. Winning Champion Beer of Britain in 2009 was an obvious highlight, as was the period between 2011 and 2013 when we built the new brewery.

Tell us about what you brew – you have some interesting plans for the future, don’t you?

I hope so! We are always creating new beers. Virgin trains are moving towards canned beer in the summer which is exciting for us as we have never produced in can before. I am also working on a craft series for a small pack.

On the 9th June, you are holding your own festival, called RUDFEST, at the brewery. What is the story behind this, how can people get details of it and how can they get there without having to drive?

We are involved in many events outside the brewery but have never done our open day before. As the brewery is now twenty-five years old I felt that we should really do something. We have arranged loads of gigs like this before so we’re confident that we can do it well. Fingers crossed that the British weather is on our side and the beer fans support us.

Finally, what would be your desert island beer and why?

I like lots of beers. I am always passionate about our Jorvik Blonde as it was the first permanent beer that I personally created. Away from Rudgate, Oakham Inferno always touches the spot. Then there is Theakston Old Peculier. And Fyne Ales Avalanche.